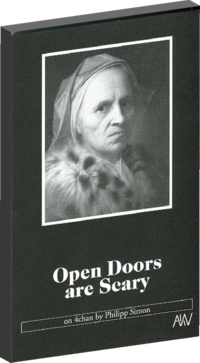 4chan.org is an imageboard website created in 2003. It's known as one of the seediest and desperate places on the internet where users generally post anonymously. At first, it may seem that only the most offensive and abhorrent messages survive on the site, and yet despite its poor reputation, can offer sincere insight into human anxieties, desires and access the darkest parts of the mind; presumed to be manipulated if not shaped by our society. Anonymity can both enable contact without restraint as well as unexpectedly awaken empathy. Obviously, it's a complex conflation of conditions, none of which can define the whole.

In his book, Simon attempts to grasp the phenomenology of 4chan by combining analytic, associative and lyrical writing with threads cited directly from the board. He postulates that the underlying structure of 4chan implements a theoretical structure that is similar to the ‚Rhizome' as described by Gilles Deleuze and Felix Guattari. This includes the concept of a dynamic system, having directions in motion instead of secluded facts and offering multiple exits.

If you don't use paypal, you can write us an email to: akvbooks@gmail.com and we arrange something.