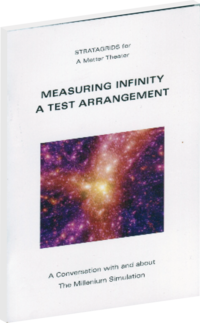 How to measure the immeasurable?
According to physicists, 95 percent of the universe consists of dark matter and dark energy, phenomena that cannot be observed, only indirectly traced and described. The Millennium-Simulation is an attempt to shed light on this supposedly powerful and yet imperceptible entity. Developed at the Max Planck Institute for astrophysics in Garching (Germany), it exists as a parallel universe, a programmed copy of the existing one, including its beginning and entire lifespan to date.  […] The following conversation is set around a paradoxical situation of the imperceptible, yet simulate-able and animate-able. Akin to a continuous bonfire, the animation of the Millennium-Simulation provides an appeasing and enlightening hub of concentration for the protagonists, [….]

In co-production with the HKW Berlin, STRATAGRIDS developed this fictional setting of speakers as an audio-play situated around a hologram of the Millennium-Simulation, demonstrated at A Matter Theater, as part of The Anthropocene Project. A Report, in October, 2014 at Haus der Kulturen der Welt, in Berlin. Based on a wide range of texts coming from the humanities, natural sciences and fiction, STRATAGRIDS compiled a conversational situation. A print copy of the original script is now provided by AKV Berlin.