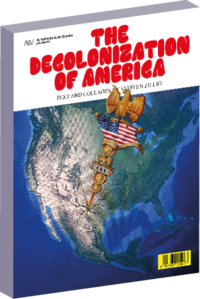 Published in collaboration with Wirklichkeit Books

Steffen Zillig
The Decolonization of America

In the not too distant future, having completed the genetic decoding of its population, the government of the United States of America decides to send those from elsewhere back out into the world. This is a remarkable attempt to re-establish society as it was before the devastating conquest of the American continent by European immigrants. Soon, convoys of “Euro-Americans” are migrating back to Europe, even though it has been decades since they had any contact with the cranky landmass beyond the Atlantic. Because Europe has long since cut itself off, wanting nothing more to do with the rest of the world. And then, all of a sudden, American refugee boats appear off the French coast...

In The Decolonization of America, Steffen Zillig creates a fictional future by collaging fragments of popular culture, combining excerpts from old and new adventure comics with washed-out photographs from the Internet. The result is a social fantasy whose bizarre fault lines and conflicts bear an uncanny resemblance to those of the present day.